To share your memory on the wall of Charles Joynes, sign in using one of the following options:

Charles was predeceased by his stepfather, Howard Joynes; his grandparents, Wakefield and Mildred Trott; and his aunt, Amy Johnson. He is survived by his wife, Lauren Joynes and their two children, Kree and Kruz; his two children Brandon (Sharkella) and Quinton Joynes from his union to their mother, Lisa Cooke; his eldest son Kevin from his union to his mother, Cynthia Smith; grandchildren Kayla, Brandon Jr. and Braxxon; his parents, Gloria Joynes and Frederick Packwood; six brothers and two sisters; and a host of aunts, uncles, nieces, nephews, cousins, and friends.

He graduated from Central High School in Chattanooga, TN. In 1976 he joined the United States Navy and was honorably discharged from active duty in 1980. Upon his return from the Navy, he attended the University of TN at Chattanooga where he received a Bachelor of Science Degree in Secondary Education, Health, and PE. There he was the director of the Upward Bound Program, a member of the soccer team and became a member of the Lambda Iota chapter of Kappa Alpha Psi Fraternity, Inc. in the spring of 1982. He later received a Master’s Degree in Education from Trevecca Nazarene University.

He worked as a teacher and principal in the Hamilton County School System for the majority ofhis adult life where he touched the lives of many. His most recent principalship was at Northlands Primary School in the Bermuda Public School System, where he served as principal from September 2013 until the early onset of his fight with cancer.

Charles had a passion for helping others. This characteristic spilled over into every facet of his life-his career as a principal, community leader, and a family man. His life was dedicated to serving others. He loved Christ, and in the latter part of his life, his walk with Christ became closer. Bubba’s love for him was abundantly clear. He took great pleasure in telling everyone that he could about God’s goodness, encouraging others to be saved.

Charles (Bubba) Joynes will be truly missed, but his spirit will continue to live on through those who truly knew and loved him.

Interment will be held, with military honors, at 10:00 am Friday, August 28, 2020 at Chattanooga National Cemetery for family and close friends. A visitation is planned for 2:00 pm Saturday, August 29th at John P. Franklin Funeral Home in the chapel, and the family memorial program will begin at 5:00 pm. The Kappa Alpha Psi Fraternity's memorial ceremony will be held at 5:30 pm.

The service will be broadcast live beginning at 5:00 pm EST Saturday, August 29th at www.johnpfranklinfuneralhomefacebook.com.

To send flowers to the family or plant a tree in memory of Charles Joynes, please visit our Heartfelt Sympathies Store.

Receive notifications about information and event scheduling for Charles

There are no events scheduled. You can still show your support by sending flowers directly to the family, or planting a memorial tree in memory of Charles Joynes.
Visit the Heartfelt Sympathies Store

We encourage you to share your most beloved memories of Charles here, so that the family and other loved ones can always see it. You can upload cherished photographs, or share your favorite stories, and can even comment on those shared by others.

Posted Sep 01, 2020 at 01:38am
He began as my principal at Clifton hills elementary and then later as my principal at Howard high...he always kept a relationship with my grandmother because she was a very active member in the school system...they literally started off on the wrong foot my granny never made it easy but later she would cook him lunch and dinner many day during the week lol I couldn't believe he got through to her...by the time I made it to high school I thought he was following me lol to make sure I succeeded i can't believe he's gone you think the important people that make an impression on your life live forever...he's going to be missed I'm sure I can't be the only pupil he had that will miss him dearly they don't make administration and disciplinarians like him anymore...rest well and look over all of us Mr. Jones you're already missed!!
Comment Share
Share via:
MF 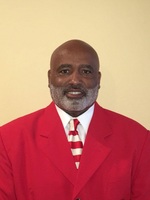