To share your memory on the wall of Warren E. Logan, Jr., sign in using one of the following options:

Provide comfort for the family by sending flowers or planting a tree in memory of Warren E. Logan, Jr.

Provide comfort for the family by sending flowers or planting a tree in memory of Warren E. Logan, Jr.

Print
Warren E. Logan, Jr. transitioned to his heavenly home on Saturday morning, January 23, 2021. He was the only son born to the union of Warren E., Sr. and Margaree Ware Logan on August 20, 1947.

Prior to his passing, for more than 25 years, Warren diligently served as President and Chief Executive Officer of the Urban League of Greater Chattanooga (ULGC), an affiliate of the National Urban League (NUL).

Prior to retirement, Warren envisioned and launched ULGC’s flagship Inclusion by Design Executive Leadership Program (IBD) to create a pipeline of diverse leaders who are prepared for executive level positions. Since inception in 2017, 50% of the IBD participants have been promoted to advanced leadership roles.

Prior to joining the Urban League, Warren served in various management and leadership positions with the Tennessee Valley Authority’s Division of Power. For several years, he served as Executive Director of the Office of Minority Business Enterprise, Statement Business Development Centers. He completed the Duke University Center for Executive Leadership, as well as a host of leadership development and continuing education training. Warren is a graduate of Tennessee State University and the Joseph Business School.

Warren’s community service activities during his career included Board Chair, Electric Power Board; Advisory Board Member, Truist (SunTrust) Bank (Chattanooga); Member of Tennessee Workforce Development Board, Bright Bridge Board of Directors/River Gorge Capital Board (NMTC) and Memorial Health Care System Board of Directors.

During a recent virtual Retirement Tribute in celebration of the organization’s Annual Equal Opportunity Day Celebration, Warren was remembered as a true community advocate and highly respected “leader among leaders,” a true testament to the vision he had for the position he loved and was personally compelled to fulfill.

Warren loved the Lord which was evident in all that he did. He arose early morning for daily meditation with God, prayed earnestly for others and had Bible Study with Urban League staff from time-to-time. He was an actively involved member of Olivet Baptist Church where he served as a member of the Church Council and was greatly loved by members of his adult Sunday school class which he taught until his health began to fail.

He was a friend to everyone and offered himself in any capacity he could; always the perfectionist in everything he undertook. He was a wonderful husband, incredible father, doting grandfather (affectionately called “Poppy”), attentive brother and loyal friend. In the words of one of his faithful friends, “Warren was a highly effective advocate, a powerful force for equity, a respected community leader, a skilled manager, a trusted facilitator, the Dean of Tennessee’s Urban Leagues and someone with influence well beyond Chattanooga.” He will be greatly missed by everyone who loved and knew him.

He was predeceased by his parents, Warren E., Sr. and Margaree Ware Logan; and great nephew, Christopher Thomas Bell.

Visitation will be held on Monday, February 1, 2021 from 2:00 p.m. – 6:00 p.m. in the chapel at John P. Franklin Funeral Home. The Kappa Alpha Psi Burial Service will take place at 6:15 p.m. at the funeral home. A private family Homegoing Service will be held will be simulcast on OBC’s website, LIVE STREAM | olivetbaptistchurch (obcministries.org) and the John P. Franklin Funeral Home Facebook page, https://www.facebook.com/jpfchattanooga/ at 11:00 am EST.

To send flowers to the family or plant a tree in memory of Warren E. Logan, Jr., please visit our Heartfelt Sympathies Store.

Receive notifications about information and event scheduling for Warren E.

We encourage you to share your most beloved memories of Warren E. here, so that the family and other loved ones can always see it. You can upload cherished photographs, or share your favorite stories, and can even comment on those shared by others.

Posted Feb 06, 2021 at 05:04pm
To my loving family of Warren Logan. I will deeply miss him and hold you all in my thoughts and prayers daily. May The Lord God Almighty Of Heaven Comfort you With His Divine Promise:
“BUT I WOULD NOT HAVE YOU BE IGNORANT, BRETHREN, CONCERNING THEM WHICH ARE ASLEEP, THAT YE SORROW NOT, EVEN AS OTHERS HAVE NO HOPE. FOR IF WE BELIEVE THAT JESUS DIED AND ROSE AGAIN, EVEN SO THEM ALSO WHICH SLEEP IN JESUS WILL GOD BRING WITH HIM. FOR THIS WE SAY UNTO YOU BY THE WORD OF THE LORD, THAT WE WHICH ARE ALIVE AND REMAIN UNTO THE COMING OF THE LORD SHALL NOT PREVENT THEM WHICH ARE ASLEEP. FOR THE LORD HIMSELF SHALL DESCEND FROM HEAVEN WITH A SHOUT, WITH THE VOICE OF THE ARCHANGEL, AND WITH THE TRUMP OF GOD: AND THE DEAD IN CHRIST SHALL RISE FIRST: THEN WE WHICH ARE ALIVE AND REMAIN SHALL BE CAUGHT UP TOGETHER WITH THEM IN THE CLOUDS, TO MEET THE LORD IN THE AIR: AND SO SHALL WE EVER BE WITH THE LORD. WHEREFORE COMFORT ONE ANOTHER WITH THESE WORDS.”
1THESSALONIANS 4:13-18
Comment Share
Share via:
PA

Posted Feb 05, 2021 at 07:19pm
I had the privilege to serve as Chair of the Urban League board under Warren’s leadership. As is known, he was a man of faith, family and community. He was a confidant and support when I need a solid foundation. My prayers go out to his family and close friends. I know he left a strong legacy and succession of leadership at the Urban League. Blessing to all!
Comment Share
Share via:
CS

Posted Feb 02, 2021 at 03:49pm
To the Logan Family,
I had the privilege and the honor to sit up under the teachings of a great prophet of God, Brother Warren Logan. He was able to explain and bring the word of God to life, like no other. He empowered us, prayed for us, encouraged us, believed in us, brought the best out of us, cried with us and taught us that God's richest blessings belonged to each one of us. It's difficult to express the spiritual impact he had on my life and how much I've matured being under his teaching. I will never be the same again!! 💕
Still with you are the memories to help you through every tomorrow - Still with you are so many people who share in your sorrow. Loved Always and Never Forgotten, Chanta Smith 🌺
Comment Share
Share via:
VD

Posted Feb 02, 2021 at 08:25am
On behalf of the Olivet Baptist Church Bereavement Support Ministry, we extend our love, thoughts, and prayers to the family of our beloved Elder Logan. We will truly miss him on this side, but we pray that we will see him again in Heaven, we will not say goodby just see you later Mr. Logan. Job well done!
Comment Share
Share via:
RT

Posted Feb 01, 2021 at 03:00pm
Mr. Logan did so much for the better of the community and his legacy will be seen for years to come. My thoughts are with his friends and family. I know he will be missed by many, many people in the community.
Comment Share
Share via: 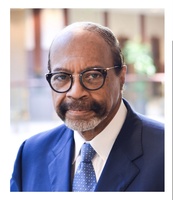