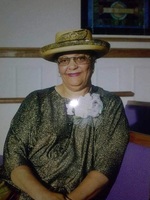 Virginia Jo Griffin Lett, 87, formerly of Chattanooga, Tennessee transitioned from this life to her heavenly home to be with her savior on February 28, 2021 in Fort Worth, Texas.

She was born in Chattanooga, Tennessee on June 14, 1933 to the late Joe A. Griffin and Ella Mae Clark Griffin. Virginia was the oldest of five children and was a natural leader in every aspect of life. She was raised in an area referred to as Bushtown and participated in the first African American Girl Scout troop in the Hamilton County area.

Virginia graduated from Booker T. Washington High School in 1951 and retired as the environmental services supervisor from Erlanger Medical Center and worked several years for Texaco. A former member of Second Missionary Baptist Church, “Gi Gi” as she was affectionately called by her great-granddaughters, was a loving and kindhearted person that absolutely loved the Lord. She enjoyed traveling, debating issues with her family and friends as well as cooking and trying new recipes. She also genuinely enjoyed gardening and growing the most beautiful roses that bloom year-round. Moreover, Virginia was known to share a meal with a neighbor in need and always fought the injustice in Hamilton County and around the world.

As a young adult she was active in the Civil Rights Movement, engaging in the marches from Selma to Montgomery and the March on Washington with the late Martin L. King Jr., John Lewis, C.T. Vivian, Dorothy I. Height, and other prominent leaders. In addition, she worked diligently to find missing children, fought for equal housing that was safe as well as inhabitable, and school desegregation to name a few. Virginia was also a member of the Hamilton County Board of Health, precinct chair, and ran a meticulous race for city council. Although not a boastful woman she was extremely proud of her accomplishments including the opportunity to represent Hamilton County at the 1992 Democratic National Convention to elect former President William Jefferson Clinton. Virginia was a dedicated member of the Armistice Temple No. 364 in Chattanooga for over 47 years in addition she served as the Daughter Ruler for several years. She was also crowned as Queen of the Elks and was an active member of several other civic organizations.

Moreover, Virginia strongly believed that the right to vote should be cherished as many people such as July Perry and Maceo Snipes, sacrificed their time and lives to provide each of us with that right. She passed this belief to her children, grandchildren, great-grandchildren, nieces, nephews, and all that had the pleasure of knowing her. In addition, Virginia was a fun person to be around that genuinely enjoyed laughing and loved to give advice to young people and especially her grandchildren and she could often be heard telling her grandchildren, “If you can’t dazzle them with brilliance, then baffle them with bullshit”, “Always be willing to fight for what you believe in”, and “Nothing in life is free, you have to earn it.”