To share your memory on the wall of Selma Abernathy, sign in using one of the following options:

She was the glue to her family. She was momma, sister, aunt, bonus mom, family to many, and never met a stranger. She had the biggest heart, would give her last, and do anything for anyone. Selma was a wonderful combination of warmth, kindness, laughter, and love. She would encourage her family to “be a boss”, push their dreams, wake up early and do something, stash $2 in secret places each day, stay in touch with your loved ones, love each other, and most importantly put God first.

To send flowers to the family or plant a tree in memory of Selma Abernathy, please visit our Heartfelt Sympathies Store.

Receive notifications about information and event scheduling for Selma

We encourage you to share your most beloved memories of Selma here, so that the family and other loved ones can always see it. You can upload cherished photographs, or share your favorite stories, and can even comment on those shared by others.

Posted Jun 15, 2021 at 10:50am
Sending my prayers to the family. God has another angel Selma thank you for your kindness.
Sheillia and Dennis Saunders jr 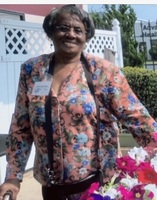