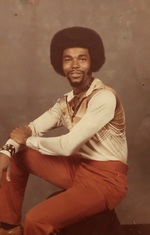 Zert was a jack-of-all-trades with a host of many talents. He was a social and active man who was deeply involved in the community. He enjoyed cutting hair, yard work, and carpentry. His family and friends will always remember him as a hardworking man.


He will be greatly missed by his 11 grandchildren, DeJuan, Nashaya, Brandon, Samuel, Paxton, and Melody, Montrel Jr, and Cora Lykes; 2 great-grandchildren; a host of nieces, nephews, family, loving in-laws, the Lykes and Lockart family, and friends.