To share your memory on the wall of Mary Eberhart Morgan, sign in using one of the following options:

The funeral service will be broadcast live beginning at 1:00 pm EST, Tuesday, January 19, 2021 at www.johnpfranklinfuneralhomefacebook.com.

Public viewing will be held 9:00 AM-12:00 PM, Tuesday, January 19, 2021 at the funeral home. A private funeral service will be held. Interment: Forest Hills Cemetery.

To send flowers to the family or plant a tree in memory of Mary Eberhart Morgan, please visit our Heartfelt Sympathies Store.

Receive notifications about information and event scheduling for Mary Eberhart

There are no events scheduled. You can still show your support by sending flowers directly to the family, or planting a memorial tree in memory of Mary Eberhart Morgan.
Visit the Heartfelt Sympathies Store

We encourage you to share your most beloved memories of Mary Eberhart here, so that the family and other loved ones can always see it. You can upload cherished photographs, or share your favorite stories, and can even comment on those shared by others.

Posted Jan 18, 2021 at 10:45pm
I was Ms Mary Faithful Care giver for over 5 years. I’m already missing her so much. Love you Ms Mary. Cora Fields and Family
Comment Share
Share via:
JP

Posted Jan 15, 2021 at 08:16am
I pray that the God of mercy, comfort the hearts of all the family members of Mary Morgan, that He will allow peace and love to about and that He will continue to hold you in the hollow of His Powerful hand. RIH Sis*

Posted Jan 13, 2021 at 10:58pm
My condolences to the family of Mary E Morgan. My friend I didn't get a chance to say goodbye. She will surely be miss. I'll see you on the other side. Gone but never forgotten. RIP my friend ⚘⚘
Comment Share
Share via:
CF

Praying for peace and joy for the family of Ms Mary. My Friend, My Buddy. My Client. Missing you Ms Mary Love Ms Cora 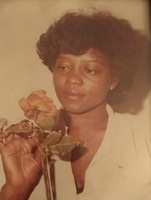