To share your memory on the wall of Johnny Williams, sign in using one of the following options:

Print
Johnny Williams, was born on April 28, 1946, in Detroit, Michigan, to the late Jonnie Malone and Berta M. Williams. Mr. Williams graduated from Howard High School, class of 1965. He worked as an engineer until his retirement.

Johnny w... Read More
Johnny Williams, was born on April 28, 1946, in Detroit, Michigan, to the late Jonnie Malone and Berta M. Williams. Mr. Williams graduated from Howard High School, class of 1965. He worked as an engineer until his retirement.

To send flowers to the family or plant a tree in memory of Johnny Williams, please visit our Heartfelt Sympathies Store.

Receive notifications about information and event scheduling for Johnny

We encourage you to share your most beloved memories of Johnny here, so that the family and other loved ones can always see it. You can upload cherished photographs, or share your favorite stories, and can even comment on those shared by others.

Strong and Johnson Family sent flowers to the family of Johnny Williams.
Show you care by sending flowers

Posted Jun 09, 2021 at 10:08am
Pastor Anthony and First Lady Madalene, Our family's thoughts and prayers are with you this week. Our warmest condolences. 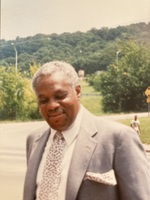