To share your memory on the wall of JoAnn Johnson, sign in using one of the following options:

Print
Ms. JoAnn Johnson, 76, passed away January 3, 2021 in a local hospital in Chattanooga. She was formerly a member of New Emmanuel Missionary Baptist Church and later became a member of Christian Fellowship C. P. Church.

She was born on M... Read More
Ms. JoAnn Johnson, 76, passed away January 3, 2021 in a local hospital in Chattanooga. She was formerly a member of New Emmanuel Missionary Baptist Church and later became a member of Christian Fellowship C. P. Church.

She was born on May 7, 1944 in Chattanooga, Tennessee, to the late Mr. Berry D. Johnson and Mrs. Ollie
Waters Johnson- Shropshire. JoAnn attended Howard High School in the 1960s, where she was instrumental in the sit-in demonstrations at Woolworth and Kress’ department stores. JoAnn was employed as a CNA for 25 years with Hamilton county nursing home, now known as the Health Center at Standifer Place.

To send flowers to the family or plant a tree in memory of JoAnn Johnson, please visit our Heartfelt Sympathies Store.

Receive notifications about information and event scheduling for JoAnn

There are no events scheduled. You can still show your support by sending flowers directly to the family, or planting a memorial tree in memory of JoAnn Johnson.
Visit the Heartfelt Sympathies Store

We encourage you to share your most beloved memories of JoAnn here, so that the family and other loved ones can always see it. You can upload cherished photographs, or share your favorite stories, and can even comment on those shared by others. 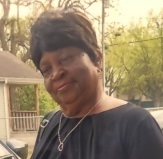