To share your memory on the wall of Davon Sherrer, sign in using one of the following options:

Davon was predeceased by his mother, Constance Tate Sherrer, and grandmother, Eliza... Read More
Davon Terrell Sherrer, (AKA: “Fly Street Jugg”), was born September 13, 1998, in Chicago, IL. He was a graduate of Howard High School Class of 2018.

Davon was predeceased by his mother, Constance Tate Sherrer, and grandmother, Elizabeth Sherrer.
He departed this life on Saturday, July 18, 2020 in Chattanooga. Davon was a loving and caring person. Davon’s music and memories will live forever in our “Hearts”.

A public viewing will be held from 9:00AM until 1:00PM, Wednesday, July 29, 2020 at the funeral home. A graveside service will be held. Interment: Forest Hills Cemetery.

To send flowers to the family or plant a tree in memory of Davon Sherrer, please visit our Heartfelt Sympathies Store.

Receive notifications about information and event scheduling for Davon

There are no events scheduled. You can still show your support by sending flowers directly to the family, or planting a memorial tree in memory of Davon Sherrer.
Visit the Heartfelt Sympathies Store

We encourage you to share your most beloved memories of Davon here, so that the family and other loved ones can always see it. You can upload cherished photographs, or share your favorite stories, and can even comment on those shared by others.

Posted Jul 23, 2020 at 11:02am
Didn't know Davin, but acknowledge that another young man gone to soon. My thoughts and prayers 🙏 are with you the family in your time of loss and grief. The Lord is always near, ask him he is Jehovah Jireh our provider, He will provide whatever it is, that you need, peace, strength, endurànce, He will walk with you and even carry you when you can't make it own your own. My prayer 🙏 is that God will make His presence known in this time.
Comment Share
Share via: 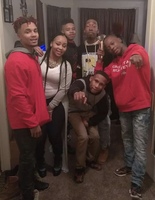