To share your memory on the wall of Carlton Richardson, sign in using one of the following options:

He was preceded in death by his parents, Belvin and Dorothy Richardson and Roderick Richardson all of Chattanooga Tn.

To send flowers to the family or plant a tree in memory of Carlton Richardson, please visit our Heartfelt Sympathies Store.

Receive notifications about information and event scheduling for Carlton

There are no events scheduled. You can still show your support by sending flowers directly to the family, or planting a memorial tree in memory of Carlton Richardson.
Visit the Heartfelt Sympathies Store

We encourage you to share your most beloved memories of Carlton here, so that the family and other loved ones can always see it. You can upload cherished photographs, or share your favorite stories, and can even comment on those shared by others.

Posted Oct 16, 2020 at 12:27pm
Please accept our most heartfelt sympathies for your loss... Our thoughts are with you and your family during this difficult time.

Posted Oct 15, 2020 at 06:36am
I met Carlton years ago. A real gentleman. Always enjoyed our conversations and look back upon them fondly. Carlton was a good man. My condolences to the Richardson family.

Posted Oct 15, 2020 at 03:03am
To the Family of our beloved classmate Carlton “Big Dog “Richardson a member of the Howard High Class of 1968.We bow our heads in humble adoration to the will of our heavenly Father who doeth all things well. We know that there are no adequate words, phrases or expressions, nor acts or deeds that can replace the void left in your lives and your hearts; we do pray that God will give you strength and peace in the days ahead.

Whereas, the days of sickness, sorrow and pain for Carlton are no more, he will be missed among us, but well accepted in the place prepared for him by our Heavenly Father. He is now absent from the body, but present with the Lord.2nd Cori thins 5:8. God’s promise is eternal to those who believe. Faith in God’s promise will bring you the peace that surpasses all understanding

Whereas GOD IN HIS INFINITE AND DIVINE LOVE has called from this earth our classmate and friend we share with you your loss and extend our deepest sympathy to you. We refer you to the Heavenly Father, who will comfort you and keep you. We shall miss his friendly smile and his kind spirit. He was a gentle giant who loved Basketball. He was a member of the Howard High Boys Varsity Basketball team. We the members of The Howard High Class of 1968 know that “HAPPINESS IS REMEMBERING”, we will remember and never forget Carlton.

Be it resolved that the will of God has been done, and whosoever liveth and believeth in me shall never die. Believest thou this? John 11:26

When I must leave you for a little while; Please do not grieve and shed wild tears; Live on and do all things the same; Feed not your loneliness on empty days, But fill each waking hour in useful ways, Reach out your hand in comfort and in cheer, And I in turn will comfort you and Hold you near, And never, never be afraid to die, For I am waiting for you in the sky.

BE IT FURTHER RESOLVED, that a copy of this resolution will be given to the Family and a copy kept in our class records.

The Bereavement Committee of the Howard High Class of 1968

Posted Oct 13, 2020 at 03:28am
My Heart goes out to the entire family. May the Promises of Revelations 21:1-4 bring a measure of comfort to you. Be strong Donny, Curtis and Teddy, his family will need your encouragement. Your friend Robert Crawford Appleberry
Comment Share
Share via:
H

Posted Oct 12, 2020 at 12:44pm
PRAYING 🙏 🙏 🙏 FOR THE ENTIRE FAMILY AS YOU GO THROUGH YOUR SEASON OF BEREAVEMENT- Elder Henrietta Erskine of Olivet Baptist Church 💛 💜
Comment Share
Share via: 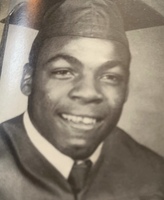