To share your memory on the wall of Buris Clemons, sign in using one of the following options:

Buris grew up in Cleveland, OH, and was educated and graduated in Rome GA. She loved to travel, relocate, fish, shop, and spend time with family. She engaged herself in the ministry and dedicated her life to Jehovah. Buris was a true survivor, who through Jehovah, prepared herself and her loved ones for her departure.

Buris is preceded in death by her mother and father, Leon Marbury, Sr. and Cora Neil Marbury; son, Antonio Marbury.

To send flowers to the family or plant a tree in memory of Buris Clemons, please visit our Heartfelt Sympathies Store.

Receive notifications about information and event scheduling for Buris

There are no events scheduled. You can still show your support by sending flowers directly to the family, or planting a memorial tree in memory of Buris Clemons.
Visit the Heartfelt Sympathies Store

We encourage you to share your most beloved memories of Buris here, so that the family and other loved ones can always see it. You can upload cherished photographs, or share your favorite stories, and can even comment on those shared by others. 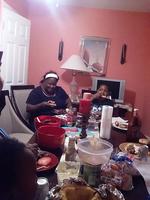